I have a story to tell about one of God’s small miracles. A true story. If I made it part of the plot of a novel, the “coincidence” would be unbelievable. 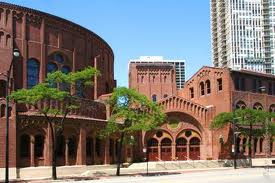 Last Christmas, I attended a concert at Moody Church in downtown Chicago with two couples from our Bible study group. My husband Ken performed in the concert. Before the music started, I was talking with my friend Peggy about the pain she still experienced from a car accident a few years ago. I mentioned that my 85 year-old mother, who has a quiet, one-woman prayer ministry, had been praying for her.

A stranger seated in front of me suddenly turned around and said, “Would your mother please pray for me, too?” He told me his name was Shad—short for Shadrach—and he explained how he was also in great pain and had trouble sleeping at night. “What’s your mother’s name?” he asked. “If she’ll pray for me, I’ll pray for her.” We exchanged information, the concert began, and Shad and I didn’t talk again.

Every morning, my mother (who lives 800 miles away from me) faithfully prays for her daughters, sons-in-law, twelve grandchildren and their spouses, and her eleven great-grandchildren—along with countless other people she hears about, like my friend Peggy. She added Shad to her list. In fact, she told me that he often came to her mind—sometimes in the night—and she prayed for him then. Most of Mom’s prayers are answered in amazing ways, but there have been some prayers that have gone unanswered for a long, long time. She rarely asks for prayer for herself, but I knew of one particular need in her life that she was trusting God to answer—and He just didn’t seem to be listening.

Four months after the Christmas concert, I returned to Moody Church with two friends on Easter Sunday to hear my husband play for their morning service—a glorious musical experience that always makes me feel like I’m in heaven, listening to the angels sing. When Mom heard that I would be returning to Moody she said, “Oh, maybe you’ll see Shad again. Find out how he’s doing. I think of him so often when I pray.”

“Impossible!” I told her. “Finding him would be like finding a needle in a haystack!”

For one thing, I couldn’t even remember what he looked like, since he sat in front of me the last time. And for another, the auditorium at Moody holds close to 4,000 people and every seat is filled on Easter. I found it impossible to imagine that I would cross paths with Shad again, especially since I would be sitting in a completely different part of the auditorium this time. But for Mom’s sake, I did look around half-heartedly that morning, eyeing the nametags that ushers and some church members wore, looking for one that said “Shad.” My friend asked me who I was searching for and I told her the story. She agreed it would be nearly impossible to find a man whose face I couldn’t recall. I didn’t even pray that God would help me find him because I didn’t really believe He would answer such a difficult prayer.

A few minutes before the service started, I happened to overhear a conversation behind me, just as Shad had overheard mine at Christmas. The two men who were talking had never met, so they introduced themselves. One of them said, “Nice to meet you. My name is Shad—short for Shadrach.”

No! Impossible! Right behind me?

I whirled around with tears in my eyes and reminded Shad how we had met at Christmas. He told me that my mother’s prayers were being answered. I marveled at how God had put him right behind me in an audience of nearly 4,000 people and he said, “You know, I started to sit farther back, but I heard the Lord telling me to move up. And there was only one empty seat—right behind you.”

I couldn’t wait to call Mom and tell her the story. Finding Shad was indeed a miracle, but I believe the even bigger miracle was that God would orchestrate this impossible reunion just to encourage His faithful, sometimes discouraged, prayer warrior. He wanted to let Mom know in a personal, seemingly impossible way that He loved her and was listening to her every word when she prays. He truly did hear all of her prayers, even the unanswered ones.

But this Easter miracle was meant for me, as well. I have no trouble believing in God’s big miracles like the Christmas story and the empty tomb—I was praising Him that morning for the miracle of His resurrection from the dead. But for the small things in my life? Surely God was too busy to micro-manage the little details. I have a few unanswered prayers of my own that I’ve been praying about for a long, long time. But when I consider the size of the crowd filling the auditorium—and overflowing into a second hall with a video screen—I can’t deny that He performed a miracle that Resurrection Sunday. Only He could put the very stranger I was searching for in the seat right behind mine.

My prayer time has been re-energized by my “chance” meeting with Shad. And I’ll continue to pray for all of the impossible, unanswered needs on my list. Because the God who is listening is a God of small miracles as well as big ones.

What are some of the small, seemingly impossible ways you’ve seen God work in your life?