I often give a speech at women’s conferences and churches across the country, about how women’s roles have changed through the past centuries. Inevitably, wherever I go, a sweet, grey-haired woman—or two or three—will come up to me afterwards and say, “You know, I was once a Rosie the Riveter.” As I listen to them talk about their jobs in shipyards and aircraft factories, I marvel at how they learned to use welding torches and rivet guns to build submarines and jet airplanes. The women all smile sweetly and say something like, “Oh, but we just did what we had to do.” 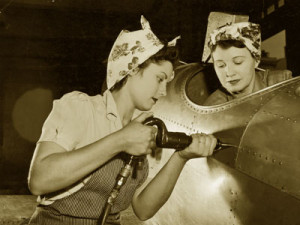 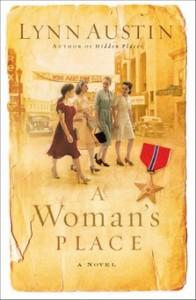 These real-life “Rosies” became the inspiration for my novel, A Woman’s Place. I interviewed dozens of them to find out what it was like to trade in their aprons for coveralls, and leave their kitchens to work a grueling, eight-hour shift in an armament factory. One of my characters, Jean, is based on a spunky woman from Texas, now in her nineties, who went on to realize her dream after the war, of earning a college education and becoming a pharmacist. She did it with her own earnings too, since Rosie didn’t enjoy the benefits of the G.I. Bill.

There wasn’t one individual “Rosie the Riveter,” there were more than six million of them. They were born shortly after that fateful Sunday, December 7, 1941 when the Japanese attacked Pearl Harbor. The United States declared war and life in America was changed forever. Husbands, fathers, brothers and sons marched off to fight, leaving the factories that produced airplanes, tanks, ships, and ammunition in dire need of manpower. The only available manpower was womanpower. In order to encourage women to join the workforce in war-time industries, the U.S. Government launched a campaign using the slogan, “We can do it.”

Norman Rockwell immortalized the image of a proud, self-confident Rosie wearing coveralls and holding a rivet gun on her lap. She appeared on the cover of the Saturday Evening Post on May 29, 1943. That same year, the song Rosie the Riveter by John Jacob Loeb became popular all across the country: 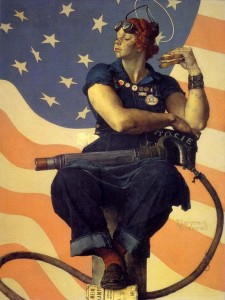 While other girls attend a favorite cocktail bar,

There’s a girl who’s really putting them to shame—

Rosie is her name.

All the day long, whether rain or shine,

She’s part of the assembly line,

The statistics that America’s “Rosie the Riveters” accumulated during those war years don’t come close to describing the heroism of these women. By the war’s end they’d built nearly 300,000 airplanes, more than 100,000 tanks and guns, nearly 400,000 artillery pieces, 47 million tons of artillery ammunition, nearly 90,000 warships, and 44 billion rounds of small arms ammunition. There were casualties, too—thousands of women died or were injured in work-related accidents. They suffered from ridicule, discrimination, sexual harassment, and unequal pay. But they did what they had to do. 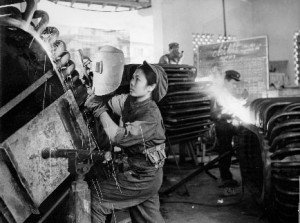 The most amazing thing to me is that they left home and went to work in an era where people honestly didn’t believe that women were capable of doing “men’s” work, physically or emotionally. Rosie proved them wrong. The August 1943 issue of Newsweek magazine reported: “They are in the shipyards, lumber mills, steel mills, foundries. They are welders, electricians, mechanics, and even boilermakers. They operate streetcars, buses, cranes and tractors.”* Women became police officers, taxicab drivers, farmers, and Civil Defense volunteers, watching the sky for enemy airplanes. 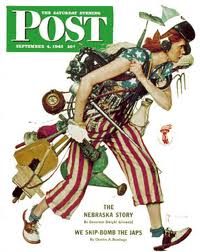 Many worked the midnight to 6:00 am shift then went home to take care of their children and households. There were no microwave ovens or pre-packaged dinners or fast-food take-outs back then. Meals had to be cooked from scratch. Laundry was an all-day task, with clotheslines instead of dryers and ironing boards instead of permanent-press. Norman Rockwell painted this portrait of a multi-tasking Rosie for the cover of Saturday Evening Post in September, 1943.

Rosie served out of patriotism. And when the war ended, she handed in her hard hat, collected her severance pay and went home so that the returning soldiers could have “their” jobs back. By then she had forever shattered all of the stereotypes about women’s work. Rosie proved that “We can do it” and left a lasting legacy. When I toured a modern-day shipyard to research A Woman’s Place, half of the workforce was made up of women. 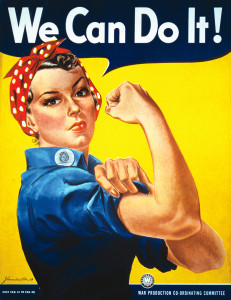 *from: Rosie the Riveter; Working Women on the Home Front in World War II by Penny Colman.