This past week, my publishing company invited me to attend the Public Library Association conference in Nashville. Librarians are among my very favorite people because they share my passion for books and reading. And the librarians I met were a warm, dedicated bunch who knew their patrons and were focused on finding the very best resources for them. I had a wonderful time. I also made a fabulous new friend, Robin W. Pearson, who was signing copies of her debut novel “A Long Time Comin’” right beside me as I signed Advance Reader Copies of my newest novel, “If I Were You.” (Releasing June 2.) 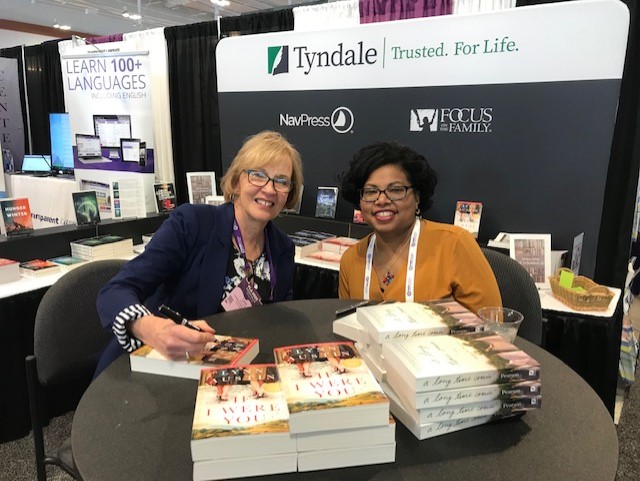 But in the days leading up to the conference, the weather reports predicted a snowstorm that threatened to derail my plans. Would the roads to the airport be clear? Would the planes be able to take off? Would the storm cause a cascade of delays and cancellations that would strand me in Chicago and make me miss the conference? I anxiously checked the weather reports several times a day before realizing that my endless worrying accomplished nothing—except to unsettle me. I vaguely recalled a scripture verse about making plans, and finally decided to look it up. It’s Proverbs 19:21:

“Many are the plans in a man’s heart, but it is the Lord’s purpose that prevails.”

Why is that such a difficult concept for me to grasp? As much as I hate having my plans scrapped, why can’t I remember that the delays and interruptions that change my plans might be exactly what God purposed all along? If I’m stuck in an airport waiting lounge, maybe there’s a lesson He is trying to teach me, or another weary traveler He wants me to reach out to. If I’ve given my life to Him, I shouldn’t be surprised when He calls me away from my plans on a mission that He has chosen.

Paul and Silas’s preaching tour of Philippi was going great until they were arrested, beaten, and thrown into jail. Late that night, God added in an earthquake for good measure. Talk about a change of plans! But these “disruptions” were all under God’s sovereign control and ultimately led to the conversion of the jailer and his entire family. The Lord’s purpose prevailed.

In the end, the snowstorm I had dreaded bypassed our area. I didn’t encounter any delays or flight cancellations. I had spent three days worrying for nothing. It reminded me of one of my characters in my novel “If I Were You.” She takes matters into her own hands after her life veers off in a direction she didn’t plan, instead of trusting God. Her schemes and lies cause a chain of consequences that make matters even worse for her. As I was writing her story I had to sigh and shake my head and say, “If only she had put her trust in God.”

Yes, Lynn, if only you would remember to trust God’s plans.